A Guide to Chief’s Island Botswana

Chief’s Island is located in the Moremi Game Reserve. It’s a large sand island, or “sandveld tongue”, that spans 1,000km2 of central Delta. The Mombo Concession, one of the Okavango’s most popular game viewing areas is located at the northern tip of Chief’s Island. BaYei locals refer to Mombo as “the place where there is plenty” and it is arguably the most fertile Okavango land. Mombo is just below the Okavango River’s split into three main channels. It supports a variety of wildlife that is hard to find elsewhere in Africa. Many animals migrate to the island when the Okavango River’s water levels rise in winter floods.

In the nineties, wild dogs ruled the Mombo Concession with the largest pack having as many 40 dogs. Their presence inspired the book Running Wild by Dave and Helene Hamman, which played an important role in raising awareness of the behaviour and vulnerable status of these lesser-known carnivores. Nowadays, Mombo is famous for its large lion population and very relaxed leopards.

Chief’s Island, the largest landmass within the Okavango Delta, is home to an amazing variety of animals. Many consider this region to be one of the most beautiful wildlife areas in Africa. Chief’s Island’s greatest hunters are lions and leopards as well as cheetahs, cheetahs, and hyaenas. The water arms are a favorite spot for hippos and crocodiles, where they can be seen swimming and cooling off. Buffalos and elephants also enjoy the area. Chief’s Island, which is home to rhinos, is also a great Big Five area. Both the black rhino and the white rhino were reintroduced to Moremi Game Reserve after their extinction in Botswana. If you’re lucky, you might also spot the rare African wild dogs. Common animals include giraffes and warthogs as well as baboons, green monkeys, warthogs and antelope species like zebras and giraffes.

Guests on Chief’s Island can enjoy the comfort of various, mostly luxurious accommodations. But mobile camps are also set up on the island by some providers. Chief’s Island’s biodiversity can be explored on classic game drives in open off-road vehicles or on exciting bush walks, which make a very special proximity to the local wildlife possible. A further experience are excursions by boat or mokoro, the traditional dugout canoe. This way of exploration allows the gentle gliding along the countless water arms, the experience of magical silence and the taking of completely new perspectives. Mokoro and boat trips depend on the season and the water level. 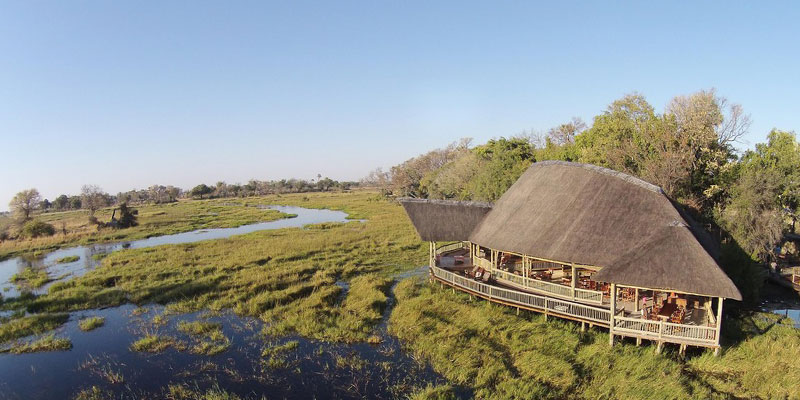 The dry season from the end of May to October proves to be a suitable travel time for the Okavango Delta. The temperatures here are clearly more pleasant than in the remaining months and lots of animals can now be found at the isolated, essential water holes. The rainy season is usually hot and humid and can be physically more strenuous. However, it is not completely advisable to refrain from a Botswana trip in the rainy season, as the high-water levels make for unforgettable mokoro experiences.

Chief’s Island is considered a unique wildlife paradise that has already served as the location for great National Geographic documentary filming. The abundance of animals in this area is immense and amazes every safari guest. Especially when the Okavango floods large parts of the delta during the annual flooding season, Chief’s Island gathers an abundance of wildlife that can be discovered during unforgettable game drives, bush walks and boat trips. If you want to see the Big Five – elephant, lion, leopard, buffalo and rhino – you have a good chance, because all five representatives are at home here. But only the untouched landscapes, with their lush vegetation, lagoons, ponds and channels, offer an incomparable, authentic and secluded Africa experience.